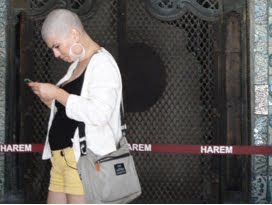 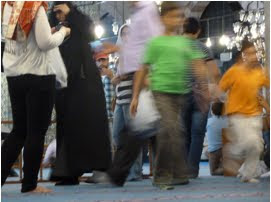 The purpose of Victoria Rance’s research trip was to subjectively experience personal and shared spaces in the city, in particular she searched for ambivalence about spaces for women. She wanted to experience how they are negotiated and demarcated in comparison to those in London. Her quest began at the Harem in Topkapi Palace, a historical designated space for women that has played an important role in the western imagination. She found the harem quieter, cooler, and more pleasant than the rest of the palace filled with noisy tourists. Similarly, in the mosques, the areas designed for women were sheltered from the noisy hustle and bustle of everyday life. In the Eminönü mosque, she witnessed children playing, chasing, and learning to walk in the shared prayer space. She learned that the demarcation of spaces is more complex than a westerner might suppose. For example, when walking to 5533 she became aware of the impact felt from the different perceptions from different routes. When arriving from the front over the Atatürk Bridge, the building felt very modern and dislocated from the small market streets behind, but when approached from the back, where children play between small local shops and a bath house, the building acts as a barrier separating the market from the busy motorway.