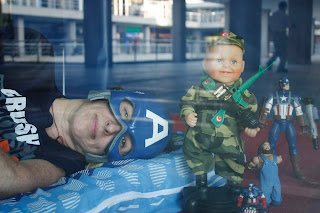 Doreen Maloney began her research for a project about male identity as represented in male dolls in the U.S. From her local discount mega store Walmart, she purchased the seductive “Captain America” doll that plays the words, “let’s take them down” and a boy’s t-shirt that echoed the toy’s aggressive quality with the slogan, “Crush, Destroy, Win.” In Maloney’s opinion, “the martial quality of these boy’s toys and clothing is a disturbing reminder of the U.S. global imperialism project, which has bankrupted our country and is fought most often by the poor who have no other alternatives but to enlist in the army to get a college education or to have a job. I find the irony of loving our children and wanting to keep them safe, juxtaposed with the toys we ‘can’ buy for them that encourages aggression and war to be obviously incongruent.” In Istanbul she continued her research by exploring the neighborhood next to 5533 where wholesale inexpensive toys were being sold for distribution to toy stores all over Istanbul. To her surprise, she found no Turkish made military toys, with the exception of a child like doll dressed in military uniform doing a belly dance to Turkish music. Since all the military toys sold in Istanbul, were printed in English and often with U.S. flags, Maloney concluded that this further underscored how the United States is packaged as an ‘aggressor’. Continuing her project on site and using both U.S. and Turkish military images and toys, she transformed the 5533 store window into a “Boy’s Room”. Workers from the shops next to 5533, only responded to the Turkish images and toys used in the window decoration, ignoring the “Captain American” toys, but at the same time, showing pleasure that the artist had made a project against warfare and aggression that encircles the world at this time.